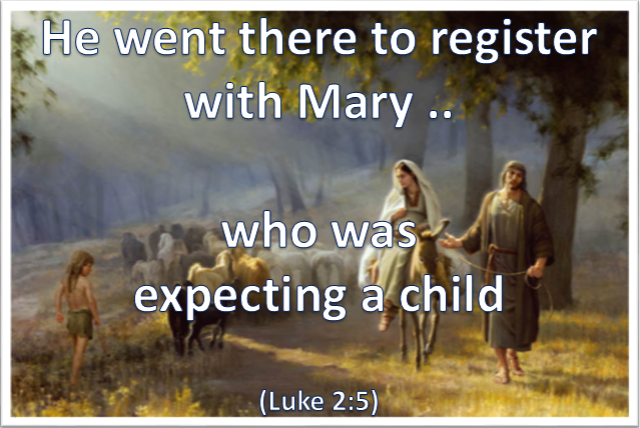 “In those days Caesar Augustus issued a decree that a census should be taken of the entire Roman world. (This was the first census that took place while Quirinius was governor of Syria.) And everyone went to his own town to register. So Joseph also went up from the town of Nazareth in Galilee to Judea, to Bethlehem the town of David, because he belonged to the house and line of David. He went there to register with Mary, who was pledged to be married to him and was expecting a child.”
(Luke 2:1-5)

Reflection:
One of the items that are probably not high on the agenda of a woman nine months pregnant is to take a trip on a donkey from one town to another – and without being certain of accommodation at the other end. This was an age without the internet, telephones, telegrams, travel agencies or organised postal deliveries – even if you did happen to know the name of the inns at your destination. Mary would have been uncomfortable, exhausted, with a sore back, and nervous of the birth itself particularly as it would take place away from home and family. She could have been forgiven for wondering why the God who had caused her to be pregnant could not have timed it all better -after all this was His Son!

And yet. There is always an ‘and yet’ with God. He had planned for the birth to take place in Bethlehem ages before. And so it happened in His time and as He willed.

“But you, Bethlehem Ephrathah, though you are small among the clans of Judah, out of you will come for me one who will be ruler over Israel, whose origins are from of old, from ancient times.” (Micah 5:2)

God is God, sovereign and almighty. He knew then, as He knows now, exactly what He was about and He had timed everything perfectly in terms of His own plans and purpose. Whether He had arranged the census, or arranged Jesus birth to fit in with the census, He had achieved His will that Jesus should be born in Bethlehem.

Our Christian walk with God will contain times of bewilderment, discomfort, darkness and even concerns about His presence and love. Some of them will be caused by our own actions, where we have taken off like the Prodigal Son or a lost sheep. Others will arise from the activities of those around us – both Christians and unbelievers – because of the fallen world in which we live. Still others will alarm us when God does not appear to be working the way that we would like or expect Him to. However, in all things and at all times, God is in control and never taken by surprise.

Wherever you are in your journey God is with you – and He is working out His will in spite of the ways of the world.

Response:
Your will and understanding God – my belief and trust.

Father you have given everything for me – help me to trust You in both the good and the challenging times of my journey. Amen.