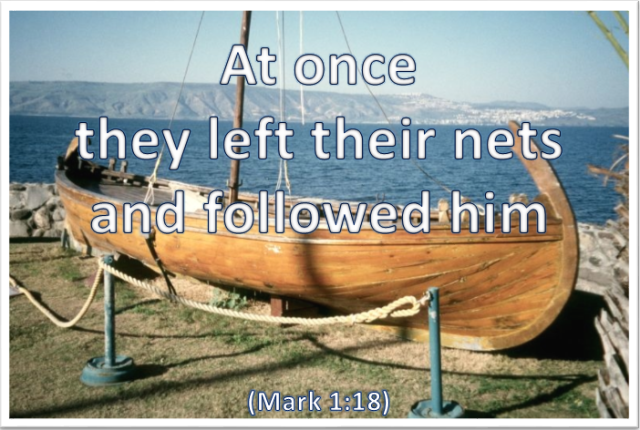 This little incident is very special. Jesus called them – and ‘at once’ they responded and came to Him. There is no questioning, negotiating or debate – nor is there a delay. They left what that were doing – that which occupied their minds and hands – and transferred their full attention to Jesus. From then on they followed Him.

It is also very challenging. There is a great tendency today to formalise Jesus and to make Him part of a ritual. We can allocate to Him certain parts of our lives and then get on with the business of living. Yet as we follow these disciples we find that Jesus became their life and their living. He occupied their thoughts and activities whilst He was with them and after He had ascended.  The psalmist put it this way,

A few years ago the press carried the story of a man who had converted to Christianity and joined a local church. After some while he told them that he was leaving. He gave as his reason the impression he had gained that to them their faith was just a hobby. He was seeking something more real and alive.

Right from the beginning Jesus Christ has taken us very seriously. He has devoted His life and living to us and taken us with Him through the Cross to the glory of the Father which He has opened to us. Our first priority should always be the Lord Himself. This is what He taught us Himself and is a standard to which He lived.

“But seek first his kingdom and his righteousness, and all these things will be given to you as well.” (Matthew 6:33)

Never cease in responding to the Lord’s call by drawing near to Him and staying there – developing an intimate and ever-present relationship with Him.

Lord Jesus You have called me to Yourself. Help me to press in closer to You and to acknowledge Your presence in every moment and aspect of my life and living. Amen.