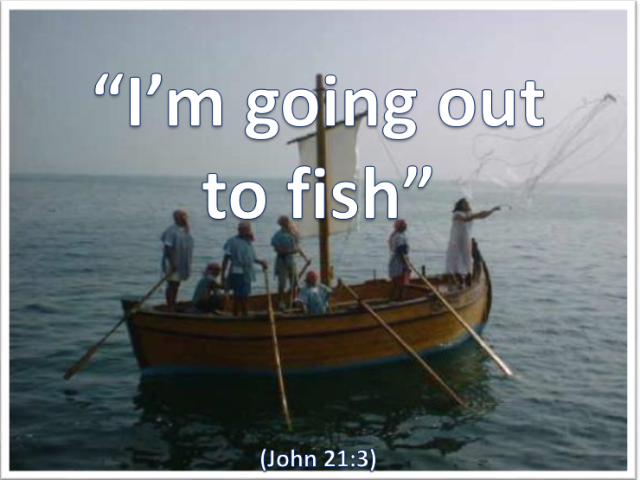 “I’m going out to fish,” Simon Peter told them,
and they said, “We’ll go with you.”
So they went out and got into the boat,
but that night they caught nothing.”
(John 21:3)

Reflection:
Jesus had already appeared to the disciples more than once. They knew of His resurrection but, unlike previously, He was not with them all the time, teaching and giving them instructions. For days at a time they were on their own.

Peter the man of action, probably restless and uncertain of what came next, went off to do what he had done previously. He went fishing, not just to try and catch one or two, but to throw out his nets to catch fish that he could then sell. He and the others fished all night but caught nothing.

Jesus appeared on the beach the next morning and told them to throw their nets on the other side of the boat. Immediately they were filled with fish – 153 large ones. What a difference it made when they were doing what Jesus told them to do. After all, He had said of Himself,

“but the world must learn that I love the Father and that I do exactly what my Father has commanded me.” (John 14:31)

There are two lessons here. The first is that to go off on our own, as Jesus disciples, and to do our own thing will not necessarily bring any rewards. We always need His guidance and blessing. The second is that Jesus is not against honest labour and is prepared to guide and bless those involved in it, if they will listen to Him – note the word ‘exactly’ in His statement. He is to be Lord of all our lives, at all times and in all things.

Response:
Look for Jesus guidance and involvement in all that you do this week

Lord Jesus, please help me to discern the way forward and to seek to do everything the way that I believe you would want me to – for Your glory. Amen.